Pressure regulating valve, also known as self balancing valve, flow control valve, flow controller, dynamic balancing valve and flow balancing valve, is an intuitive and simple flow regulating control device. The application of flow regulating valve in pipe network can directly set the flow according to the design. Under the action of water, the valve can automatically eliminate the flow deviation caused by the residual pressure head and pressure fluctuation of the pipeline, regardless of the system The function of the valve makes the flow regulation of the pipe network complete at one time, which turns the network regulation into a simple flow distribution and effectively solves the hydraulic imbalance of the pipe network. Flow control valve is mainly used in: central heating (cooling) and other water systems, so that the pipe network flow distribution according to demand, eliminate the water system hydraulic imbalance, solve the problem of uneven heat and cold.

By receiving the signal from the industrial automation control system (such as 4 ~ 20mA), the valve is driven to change the cross-sectional area between the valve core and the valve seat, and control the flow, temperature, pressure and other process parameters of the pipeline medium. Realize the function of automatic regulation. 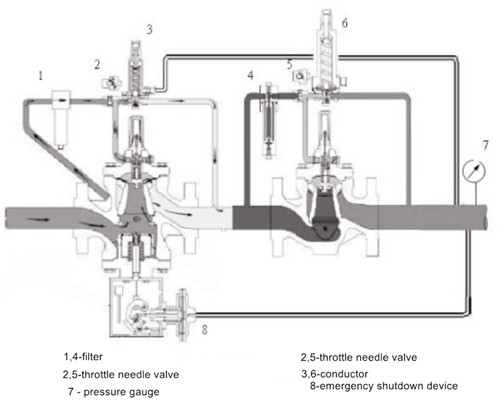 Because pneumatic control valve has the advantages of intrinsic explosion-proof and reliable performance, pneumatic control valve is still the main control valve at home and abroad.
In the past, the domestic production of small flow control valve. The maximum operating pressure can reach 100 kg / cm2, and the rated flow capacity C value can range from 0.05 to 0.0012. The valve seat aperture is 3 mm, the valve core is cylindrical, there are one or several V-shaped grooves on it, the valve stem stroke is 6 mm, the valve has no matching positioner, so the control accuracy is poor.
China has also introduced small flow control valve. The flow capacity is about 0.001, and the valve core is a cylinder with a notch. The working pressure is 300 kggcm2, stem stroke is 7 / 16 inch, and the valve core is conical. The valve is equipped with Moore’s top mounted positioner.
These valves are characterized by simple structure and light weight. The commonly used valve seat aperture is 1 / 8-1 / 4 inch (about 3.175a-6.35mm), and the stem stroke is 1 / 4-1 / 2 inch (about 6.35-12.7mm). The minimum flow capacity of this kind of valve can be 0.00006 or even smaller.
Generally speaking, the cylindrical slotted spool is better than the conical spool in characterization. It can obtain design characteristics by changing the groove depth, but the latter has good adjustability, because the fluid passing through the valve is distributed on the whole circumference of the spool section. This kind of valve is often used in the situation where the accuracy requirement is not very high. But the accuracy of capacity and reproducibility of characteristics are poor.
For a 1 / 16 inch orifice, the theoretical CV value is about 0.06, or just close to the upper limit of small flow. In order to further reduce the flow rate, it is necessary to reduce the stroke of the spool or restrict the opening of the flow hole.

For high pressure small flow control valve, a series of problems caused by high pressure and high pressure difference must also be considered. For example, the actuator must have enough output force to overcome the unbalanced force of medium, the strength of valve parts, high pressure sealing, and the most critical is the material and processing of valve core and seat.
The reasons for the damage of valve core and valve seat of high-pressure control valve are very complex, and the theories are not the same, but the erosion phenomenon (also known as velocity effect) caused by the movement of high-speed liquid (gas) flow relative to valve core and valve seat and the cavitation phenomenon of liquid medium under high-pressure difference are generally paid attention to. The former is the erosion trace related to the streamline, while the latter is the sponge hole.
In the case of cavitation, if the material of valve core and valve seat is not selected properly, the valve will be scrapped in a few days or months.
To solve the problem of cavitation, we should seek the methods to avoid cavitation and the materials to resist cavitation. There are several methods to avoid cavitation:

The self operated pressure regulating valve does not need other external energy sources, such as power supply and gas source, but only depends on the energy of the medium itself. It is energy-saving, environmental friendly and easy to use. After the installation, it can be put into automatic operation after setting the pressure value. Therefore, it is widely used in the occasions where the control accuracy is not high and the power supply and gas source are lacking. But in the process of use, we must pay attention to the particularity of the selection, otherwise it is easy to cause accidents. In the process of using, we should pay attention to the selection and installation environment. Therefore, it is very important to understand the working principle and structure of the self operated pressure regulating valve in detail.

The so-called small flow control valve, as the name suggests, is a very small flow capacity control valve.
The flow capacity of the valve is the valve capacity index under the unified conditions. In China, it is expressed by C value. It is defined as: when the valve is fully open, when the pressure difference between the front and back of the valve is 1kg / cm2 and the medium weight is 1g / cm3, the medium mass (3m / h) flowing through the valve every hour. For incompressible fluid, the flow capacity of the valve only depends on the structure of the valve itself under the condition of sufficient turbulence. When calculating the required valve flow capacity, it should be noted that when the media or flow conditions are different, the flow state in the valve will be very different.
In the case of small flow rate, especially in the case of viscous fluid and low pressure, the main constraint of fluid is laminar flow or the mixed state of laminar flow and turbulence. In laminar flow, there is a linear relationship between the medium flow through the valve and the pressure difference before and after the valve. In the laminar and turbulent mixed state, with the increase of Reynolds number, even if the pressure difference does not change, the medium mass through the valve will increase. In the case of complete turbulence, the flow rate does not change with Reynolds number. However, the traditional method and calculation formula are still used to select the small flow control valve. However, the calculated value deviates greatly from the actual value. According to the data, when CV is below 0.01, it is only used as a capacity index and has reference significance. The actual circulation capacity should be determined by experience.
As the flow capacity decreases, the adjustable ratio of the valve will decrease. But at least 10:1 to 15:1 can be guaranteed. If the adjustable ratio is smaller, it is difficult to adjust the flow.
When the valve is used in series, with the change of opening, the pressure difference before and after the valve also changes, so the working characteristic curve of the valve deviates from the ideal characteristic. If the pipeline resistance is large, the straightness will become a quick opening characteristic and lose the regulation ability. The equal percentage property becomes a straight line property. Under the condition of small flow rate, because there is little pipeline resistance, the distortion of the above characteristics is small, and the equal percentage characteristics are not necessary. From the manufacturing point of view, when CV = 0.05 or less, it is impossible to produce the same percentage of side shape. Therefore, the main problem of small flow valve is how to control the flow within the required range.
From the perspective of economic effect, users hope that a valve can be used for both closure and regulation, which can also be achieved. But for the control valve, the main is to achieve the control of flow, closing is secondary. It is wrong to think that the flow of small flow valve itself is very small and it is easy to achieve closure when it is closed. In foreign countries, the leakage of small flow control valve is also regulated. When CV is 10, the leakage of the valve is 3.5kg/cm. Under air pressure, the leakage is less than 1% of the maximum flow.

Self operated pressure regulating valve (hereinafter referred to as pressure valve) is a kind of energy-saving product, which can automatically adjust the pressure only depending on the pressure change of regulating medium without external energy. It has the comprehensive functions of measurement, execution and control. Widely used in petroleum, chemical, metallurgy, light industry and other industrial sectors and urban heating, heating system. This product can be used for pressure control device of non corrosive liquid, gas and steam medium. 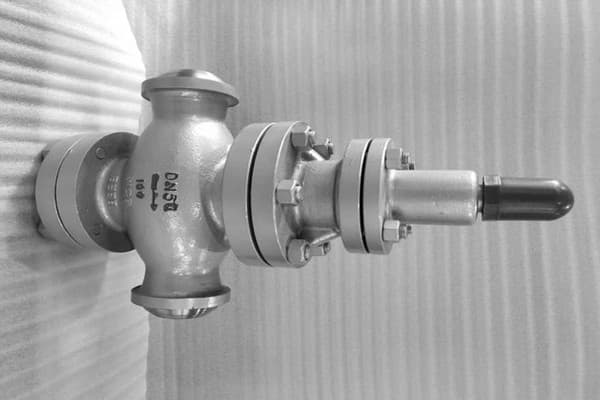