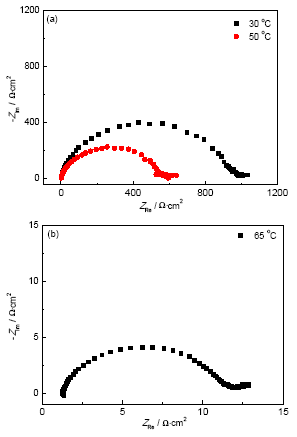 Fig.3 Surface morphology of 254SMo stainless steel after measurement of polarization curve in simulated condensate at 65 ℃ The size of the hysteresis loop in the cyclic polarization curve usually reflects the repairability of the passive film on the metal surface. The smaller the hysteresis loop, the stronger the repair ability of the passive film [14,15,16]. As can be seen from Figure 5, when the solution temperature is 30 and 50 °C, a small hysteresis loop appears on the cyclic polarization curve. As the temperature increases, the hysteresis loop area increases and the self-healing ability of the passive film decreases. When the solution temperature rises to 65 °C, the retrace polarization current density at the same potential is significantly greater than the positive sweep polarization current density. Pit corrosion is found on the surface of the sample after the experiment. This is mainly because in the 65°C solution, when the potential of the sample is higher than the pitting potential during the positive scan, serious pitting has occurred. Even if the electrode potential is swept back to the negative potential, it is still difficult to stop immediately. The further expansion of pitting has led to an increase in the polarization current density, at which point the stainless steel passivation film rupture cannot be repaired.